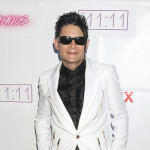 Corey Scott Feldman was born on July 16, 1971 in Los Angeles, California. He landed his first role in a McDonald’s commercial when he was only three years old. As a child he also appeared in a lot of other television commercials and shows, including Mork & Mindy and Cheers. In 1987, he won the Young Artist Award for Best Leading Young Actor in a Feature Film for his work in The Lost Boys.

Feldman also starred in top-notch films such as Friday the 13th: The Final Chapter (1984), Stand By Me (1986), and Teenage Mutant Ninja Turtles (1990). He continued to take on small roles in independent films throughout the 1990’s, appearing in The Crow: Stairway to Heaven in 1999. He began singing and released an album titled Former Child Actor in 2002. He appeared opposite David Spade in a 2004 film, and in 2007 he teamed up with the late Corey Haim to create The Two Coreys, which only lasted two seasons because Feldman refused to continue working with Haim if he did not stop using drugs.
Feldman has also appeared in music videos for popular artists like Neon Trees, Mac Miller, 30 Seconds to Mars, and Katy Perry. He had a brief stint on Dancing on Ice in the U.K. and also released a book in 2013 titled Coreyography, in which he discussed his rough past and struggles.

How to book Corey Feldman?

The contact details for Corey Feldman management can be found here at Booking Agent Info. You can get access to all of Corey Feldman contacts by signing up and becoming a member. Corey Feldman's manager is Scott Carlson.

What is Corey Feldman's booking price?

The Corey Feldman booking fee depends on different factors like the date, location, and market activity. Booking Agent Info provides price estimates for booking Corey Feldman, and you would need to contact Corey Feldman's agent to get the official pricing.

..with the contact information for Corey Feldman agent, manager, and publicist.