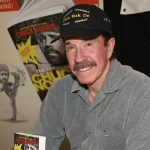 Chuck Norris is an American actor, producer and screenwriter. He was born Carlos Ray Norris on the 10th of March, 1940. Norris has a Military career, serving in the United States Air Force, and he also has a martial art training, earning black belts in several disciplines like Tang Soo Do. In 1967, Norris was declared champion at the S. Henry Cho’s All-American Karate Championship at the Madison Square Garden. He started his acting career in 1972, when he played Bruce Lee’s nemesis in the cult movie “Way of the Dragon”. The film was a huge success and it fuelled Norris career, who went on to star several other movies. He played alongside Lo Wei, in “Yellow Face Tiger” and he starred “Breaker! Breaker!” in 1977. The following year, he starred in “Good Guys Wear Black” directed by Ted Post. From there on, Chuck Norris became an action movie star, playing in over 20 movies such as “The President’s Man”, “Forced Vengeance”, “Walker: Texas Ranger”, among many others. In 1999, Norris was welcomed into the Martial Arts History Museum’s Hall of Fame.

How to book Chuck Norris?

The contact details for Chuck Norris management can be found here at Booking Agent Info. You can get access to all of Chuck Norris contacts by signing up and becoming a member. Chuck Norris's manager is Erik Kritzer. Email [email protected] if you have questions about our service.

You will want to contact Chuck Norris's publicist. Chuck Norris's press and management team handles all inquiries involving: interviews, press, and all things media related. You can get the contact info for Chuck Norris publicist at Booking Agent Info.

What is Chuck Norris's booking price?

The Chuck Norris booking fee depends on different factors like the date, location, and market activity. Booking Agent Info provides price estimates for booking Chuck Norris, and you would need to contact Chuck Norris's agent to get the official pricing.

..with the contact information for Chuck Norris agent, manager, and publicist.