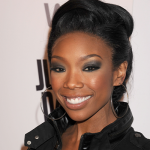 Singer and actress Brandy was born Brandy Rayana Norwood on February 11, 1979 in McComb, Mississippi, where she started singing as part of the church choir. She is the older sister of singer Ray J. She worked as a background singer for the boy band Immature before signing with Atlantic Recording Corporation in 1993 and her debut album, Brandy, was released the following year. The album produced three top ten hits, “I Wanna Be Down”, “Baby”, and “Brokenhearted” a duet with Wanya Morris of Boyz II Men. During this time, Brandy also contributed songs for the soundtracks of the films Batman Forever, Waiting to Exhale, and Set It Off. In 1996, she landed the title role on the UPN sitcom, Moesha, which aired for six seasons. The following year, producer Whitney Houston hand-picked Brandy to star in a television version of Cinderella alongside Jason Alexander, Whoopi Goldberg and Houston herself.

In June of 1998, Brandy released her second album, Never Say Never, which contained the single “The Boy Is Mine.” A duet with R&B singer Monica, the song spent 13 weeks at #1 on the Billboard Hot 100 and won the Grammy for Best R&B Performance by a Duo or Group with Vocal. Brandy made her big screen debut in I Still Know What You Did Last Summer (1998.) She also released three more albums, Full Moon (2002), Afrodisiac (2004), and Human (2008.) In April of 2010, Brandy, Ray J and their parents began starring in the VH1 reality show Brandy and Ray J: A Family Business. That fall, Brandy competed on the 11th season of Dancing with the Stars and was partnered with Maksim Chmerkovskiy. In 2011, she had recurring roles on both 90210 and Drop Dead Diva. The following year, she joined the cast of the BET comedy series The Game. In February of 2012, Brandy reunited with Monica for the latter’s single “It All Belongs to Me” and, later that year, she released her own single “Put It Down” featuring Chris Brown. Her sixth album, Two Eleven, was released on October 12, 2012. In 2013, Brandy returned to the big screen in Tyler Perry’s Temptation: Confessions of a Marriage Counselor, in which she was part of an ensemble cast including Jurnee Smollett-Bell, Lance Gross and Vanessa L. Williams.

How to book Brandy?

You can book Brandy for your event by contacting Brandy's agent. Brandy agent will be able to provide you everything you need to hire Brandy including availability and pricing. You can get the contact info for Brandy's agent in our database. Brandy's former agent is Lauren Williams.

The contact details for Brandy management can be found here at Booking Agent Info. You can get access to all of Brandy contacts by signing up and becoming a member. Brandy's managers are Sonja Norwood, Ryan Ramsey and Manny Dion. Brandy's former managers are Steven Greener and Jeff Morrone. Brandy general email is [email protected].

You will want to contact Brandy's publicist. Brandy's press and management team handles all inquiries involving: interviews, press, and all things media related. You can get the contact info for Brandy publicist at Booking Agent Info.

What is Brandy's booking price?

The Brandy booking fee depends on different factors like the date, location, and market activity. Booking Agent Info provides price estimates for booking Brandy, and you would need to contact Brandy's agent to get the official pricing.

..with the contact information for Brandy agent, manager, and publicist.