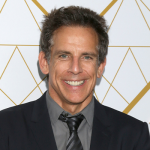 Benjamin Edward Meara Stiller was born November 30,1965 in New York, New York. He inherited his father’s talent and followed his steps. His father is a famous comedian, so Hollywood lifestyle and A-list actors were in Ben’s everyday surroundings. Even though he was close to Hollywood, his beginnings were in the theater.  His role in The House of Blue Leaves  won him a Tony Award and led him to a part on Saturday Night Live in 1989, followed by NBC TV Show, The Ben Stiller Show in 1992. The show was not so popular amongst the viewers, but it did secure him an Emmy for the best TV Show.

A significant part of his work at the time was an independent production. In 1994, Stiller produced Reality Bites. Since then, he has become very much appreciated by critics and viewers. In 1996 he got his first big budget film and role of director in The Cable Guy, which featured Jim Carrey. In 1998, There’s Something About Mary got him accepted as the comedian by mainstream media, critics, and public. The film earned about $369 million at the box office. This success followed by the movies Keeping the Faith, Meet the Parents, The night at the Museum, Starsky and Hutch, and Zoolander as well as a voice in the Madagascar film. His most famous roles are with Robert De Niro in Meet the Parents, Meet the Fockers and Little Fockers. Ben Stiller is multiple time winner of the MTV Movie Awards and an honorary member of Princeton University.

How to book Ben Stiller?

The contact details for Ben Stiller management can be found here at Booking Agent Info. You can get access to all of Ben Stiller contacts by signing up and becoming a member.

You will want to contact Ben Stiller's publicist. Ben Stiller's press and management team handles all inquiries involving: interviews, press, and all things media related. You can get the contact info for Ben Stiller publicist at Booking Agent Info.

What is Ben Stiller's booking price?

The Ben Stiller booking fee depends on different factors like the date, location, and market activity. Booking Agent Info provides price estimates for booking Ben Stiller, and you would need to contact Ben Stiller's agent to get the official pricing.

..with the contact information for Ben Stiller agent, manager, and publicist.