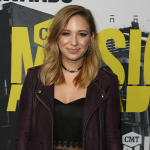 Olivia Joy Lane is a country singer and songwriter born on July 26, 1991, in Houston, Texas, USA. She studied songwriting and theater at the University of Southern California. Her debut EP, Love Thing, was released in 2014 by Big Spark Music Group. It included the single, Steal Me Away, co-written with Lee Thomas Miller (Randy Travis, Brad Paisley) and Ilya Toshinsky.

The Nashville-based vocalist has supported Wynonna, Randy Houser, the Marshall Tucker Band, Frankie Ballard, and more. In 2016, she released a self-titled mini-album featuring songs recorded at Dark Horse Recording Studios the previous year. After the mini-album, she released a single yearly, including Devil and You in 2017, You Got Me in 2018, and Hey 3AM in early 2019. In addition, she released her sophomore EP, The One, later in 2019.

In September 2021, she released the album HEART CHANGE. The 11-track album included Living Instead, BOY'S STILL GOT IT, WOMAN AT THE WELL, and I Let The Devil In. Her podcast, Living Instead with Olivia Lane, touches on deeply personal and introspective subjects.

How to book Olivia Lane?

The contact details for Olivia Lane management can be found here at Booking Agent Info. You can get access to all of Olivia Lane contacts by signing up and becoming a member.

You will want to contact Olivia Lane's publicist. Olivia Lane's press and management team handles all inquiries involving: interviews, press, and all things media related. You can get the contact info for Olivia Lane publicist at Booking Agent Info.

What is Olivia Lane's booking price?

The Olivia Lane booking fee depends on different factors like the date, location, and market activity. Booking Agent Info provides price estimates for booking Olivia Lane, and you would need to contact Olivia Lane's agent to get the official pricing.

..with the contact information for Olivia Lane agent, manager, and publicist.