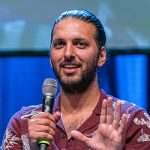 Shazad Latif is an English/Pakistani actor who was born on July 8, 1988, in London. He started to study acting but quickly quit after he found his first acting job in the TV series “Spooks” in 2009, where he played Tariq Masood up until 2011. After this project followed many appearances on different tv shows including “Fresh Meat”, “Comedy Lab”, “Black Mirror”, “Silk”, “My Mad Fat Diary”, “Love Matters” and “Ordinary Lives”. He was part of the comedy series “Toast to London” from 2012 to 2015. He participated in the movie “The Second Best Exotic Marigold Hotel” in 2015, which starred international stars such as Judi Dench, Maggie Smith and Dev Patel. In 2016, he landed on the series “Penny Dreadful” for eight episodes and the following year he participated in the series “Star Trek: Discovery” for 25 episodes. He is mostly known for his appearance in the blockbuster move “The Commuter”, which stars Liam Neeson, Vera Farmiga and Patrick Wilson.

How to book Shazad Latif?

The contact details for Shazad Latif management can be found here at Booking Agent Info. You can get access to all of Shazad Latif contacts by signing up and becoming a member. Shazad Latif's manager is Atil Singh.

You will want to contact Shazad Latif's publicist. Shazad Latif's press and management team handles all inquiries involving: interviews, press, and all things media related. You can get the contact info for Shazad Latif publicist at Booking Agent Info.

What is Shazad Latif's booking price?

The Shazad Latif booking fee depends on different factors like the date, location, and market activity. Booking Agent Info provides price estimates for booking Shazad Latif, and you would need to contact Shazad Latif's agent to get the official pricing.

..with the contact information for Shazad Latif agent, manager, and publicist.