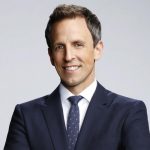 Seth Meyers is a well known American writer, actor, television host, comedian and political commentator. Born in Illinois, Meyers began his career in comedy as a member of Northwestern University’s improv club Mee-Ow Show. He worked with many other improv groups before joining the cast of Saturday Night Live in 2001.  On the show he impersonated figures such as Michael Caine, Prince Charles, Ryan Seacrest, Tobey Maguire, Tom Cruise and Bill Cowher. He received great critical praise for his work on SNL and left the show in 2014.

In 2014 Meyers succeeded Jimmy Fallon as the host of The Tonight Show on NBC. He has successfully hosted the show since 2014, and has been nominated for over 35 awards during his career; he has won five awards for his work so far.

How to book Seth Meyers?

The contact details for Seth Meyers management can be found here at Booking Agent Info. You can get access to all of Seth Meyers contacts by signing up and becoming a member. Seth Meyers's manager is Tim Sarkes.

You will want to contact Seth Meyers's publicist. Seth Meyers's press and management team handles all inquiries involving: interviews, press, and all things media related. You can get the contact info for Seth Meyers publicist at Booking Agent Info.

What is Seth Meyers's booking price?

The Seth Meyers booking fee depends on different factors like the date, location, and market activity. Booking Agent Info provides price estimates for booking Seth Meyers, and you would need to contact Seth Meyers's agent to get the official pricing.

..with the contact information for Seth Meyers agent, manager, and publicist.