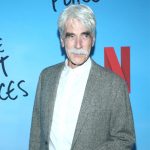 Sam Elliott is an American actor born in Sacramento, California on August 9, 1944. He became well known for playing cowboys and ranchers in Western films and shows. Elliott made his debut in film in 1967 in the movie The Way West and continued landing roles in the films Butch Cassidy and the Sundance Kid, Frogs, Molly and Lawless John, The Legacy, Time Bandits, The Thing, The Blue Lightning, The Doors, Rush, Dog Watch, We Were Soldiers, The Contender, Hulk, Thank You For Smoking, Up in the Air, Ghost Rider, A Star Is Born and many more. In 1968 he made his debut on television in the show Felony Squad and has since had roles in the shows Land of Giants, Lancer, Mission: Impossible, Gunsmoke, The Mob Squad, Hawaii Five-0, Once and Eagle, Justified, Parks and Recreation, The Ranch, Grace and Frankie and others. Elliot has had around 100 acting credits in film and television. Throughout his career he has been nominated for a number of awards and has won a Nation Board of Review Award and a Critics’ Choice Television Award.

How to book Sam Elliott?

The contact details for Sam Elliott management can be found here at Booking Agent Info. You can get access to all of Sam Elliott contacts by signing up and becoming a member. Sam Elliott's managers are Becca Kovacik and Laura Berwick.

You will want to contact Sam Elliott's publicist. Sam Elliott's press and management team handles all inquiries involving: interviews, press, and all things media related. You can get the contact info for Sam Elliott publicist at Booking Agent Info.

What is Sam Elliott's booking price?

The Sam Elliott booking fee depends on different factors like the date, location, and market activity. Booking Agent Info provides price estimates for booking Sam Elliott, and you would need to contact Sam Elliott's agent to get the official pricing.

..with the contact information for Sam Elliott agent, manager, and publicist.