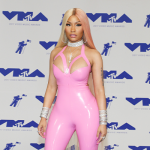 International superstar Nicki Minaj was born Onika Tanya Maraj on December 8, 1983, in Saint James, Trinidad and Tobago. After holding a string of jobs in her teenage years, Nicki Minaj had a brief sting with the rap group The Hoodstars before pursuing a solo career. She uploaded some of her tracks on Myspace, and was eventually found by Fendi, the CEO of Dirty Money Entertainment. In 2007, Nicki Minaj released her debut mixtape Playtime is Over, followed by her second Sucka Free in 2008. Those releases earned her the Female Artist of the Year Award at the Underground Music Awards of 2008. Nicki Minaj would follow this recognition with her third mixtape, Beam Me Up Scotty, in 2009, coverage by XXL Magazine, and a deal with Young Money Entertainment. That same year, she had a solo verse on the single “BedRock” alongside Lil Wayne, Drake, Tyga, and Lloyd, among various others.

Minaj released her debut album Pink Friday in 2010, which went Platinum thanks so singles such as “Your Love”, “Super Bass”, and “Moment 4 Life”. The next year, she released Pink Friday: Roman Reloaded, a nod to her alter-ego Roman, featuring songs such as “Starships”, “Beez in the Trap”, and “Roman Reloaded”. In 2012, she became the first female rapper to ever perform solo at the Grammy Awards, and that year it was announced she would become a judge on American Idol. In June 2014, Nicki Minaj won her fifth consecutive Best Female Hip-Hop Artist Award at the BET Awards, tying her with Missy Elliot. She released her third studio album The Pink Print a few months later.

How to book Nicki Minaj?

The contact details for Nicki Minaj management can be found here at Booking Agent Info. You can get access to all of Nicki Minaj contacts by signing up and becoming a member. Nicki Minaj's former managers are Irving Azoff, Brian Sher and Gee Roberson.

You will want to contact Nicki Minaj's publicist. Nicki Minaj's press and management team handles all inquiries involving: interviews, press, and all things media related. You can get the contact info for Nicki Minaj publicist at Booking Agent Info.

What is Nicki Minaj's booking price?

The Nicki Minaj booking fee depends on different factors like the date, location, and market activity. Booking Agent Info provides price estimates for booking Nicki Minaj, and you would need to contact Nicki Minaj's agent to get the official pricing.

..with the contact information for Nicki Minaj agent, manager, and publicist. 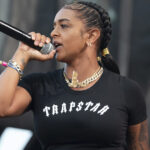