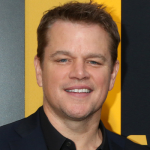 Matt Damon was born on October 8, 1970 in Cambridge, Massachusetts. Damon got his start in Harvard working on student plays before getting a single line in the 1988 film Mystic Pizza. He shot to stardom after his work writing and co starring in Good Will Hunting (1997), which earned him an Oscar nomination for Best Actor and a win for Best Screenplay. He later starred in The Rainmaker in 1997, Saving Private Ryan (1998), Rounders (1998) and The Talented Mr. Ripley (1999). He also appeared in Dogma (1999) before attempting entry into romantic comedies.

Damon starred in Ocean’s Eleven and its later sequels before taking the lead role as Jason Bourne in the Bourne Identity film series. He guest-starred on the television show Entourage in 2009 and later landed a role in Invictus (2010). He appeared in a remake of True Grit (2010) and had lead roles in Interstellar, The Monuments Men and The Martian, the latter of which earned him a Golden Globe Award and another Oscar nomination.

How to book Matt Damon?

The contact details for Matt Damon management can be found here at Booking Agent Info. You can get access to all of Matt Damon contacts by signing up and becoming a member.

You will want to contact Matt Damon's publicist. Matt Damon's press and management team handles all inquiries involving: interviews, press, and all things media related. You can get the contact info for Matt Damon publicist at Booking Agent Info.

What is Matt Damon's booking price?

The Matt Damon booking fee depends on different factors like the date, location, and market activity. Booking Agent Info provides price estimates for booking Matt Damon, and you would need to contact Matt Damon's agent to get the official pricing.

..with the contact information for Matt Damon agent, manager, and publicist.