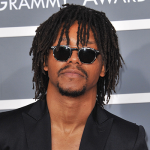 Chicago born rapper, songwriter, and producer Lupe Fiasco was born Wasalu Muhammed Jaco on February 16, 1982. Though his parents divorced when he was five, both contributed an indelible influence on his life and career, especially his father, who introduced him and his nine siblings to a wide variety of musical genres. He got into poetry as a teenager since he was not instrumentally inclined, and after listening to Nas‘ album It Was Written from 1996, he was hooked on rap and creating lyrics. He self-recorded the track “Could Have Been”, which was discovered by MTV, and shortly after, Lupe Fiasco was signed to Arista Records, and later to Atlantic Records, under which he released his mixtape Fahrenheit 1/15. After appearing on a track from Kanye West’s Late Registration, Lupe Fiasco released his debut album Lupe Fiasco’s Food & Liquor in 2006. Jay-Z was involved in the production of the album, which was nominated at the Grammy Awards, including the award for Best Rap Album.

2007 saw the release of his second album, entitled Lupe Fiasco’s The Cool, which was heavily influenced by the death of his father and the arrest of his business partner. Lupe Fiasco then went on tour alongside Kanye West, Rihanna, and N.E.R.D. in 2008. Fiasco went on to release Lasers in 2011, which featured the single “The Show Goes On”, a track which charted at #57 on the Billboard Hot 100, and incorporated artists such as Trey Songz and John Legend. He was again nominated for multiple Grammy Awards the next year for his work. Fiasco followed the success of 2011 with Food & Liquor II: The Great American Rap Album Pt. 1 in 2012 and Tetsuo & Youth in 2014. Lupe Fiasco is also heavily involved in political and global causes, and in 2010, released a track with Kenna entitled “Resurrection”, whose donations went to relieve the victims of the earthquake in Haiti.

How to book Lupe Fiasco?

The contact details for Lupe Fiasco management can be found here at Booking Agent Info. You can get access to all of Lupe Fiasco contacts by signing up and becoming a member. Email [email protected] if you have questions about our service.

You will want to contact Lupe Fiasco's publicist. Lupe Fiasco's press and management team handles all inquiries involving: interviews, press, and all things media related. You can get the contact info for Lupe Fiasco publicist at Booking Agent Info.

What is Lupe Fiasco's booking price?

The Lupe Fiasco booking fee depends on different factors like the date, location, and market activity. Booking Agent Info provides price estimates for booking Lupe Fiasco, and you would need to contact Lupe Fiasco's agent to get the official pricing.

..with the contact information for Lupe Fiasco agent, manager, and publicist.