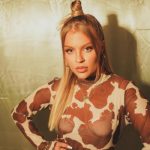 Luísa Gerloff Sonza, popularly known as Luisa Sonza, is a singer, songwriter, and actress born on July 18, 1998, in Rio Grande do Sul, Brazil. She started singing at five years old in song festivals, and by seven, she joined and performed with the band Sol Maior until she was 17.

In 2014, she began posting song covers on her YouTube channel, earning her the moniker Queen of Covers. She signed with Universal Music in May 2017 and later released her debut single, Good Vibes. In October 2017, she released her self-titled debut EP. Her debut album, Pandora, was released in June 2019.

The album was preceded by Pior Que Possa Imaginar, which entered Brazil's Top 100 and the Top 20 on streaming. It was certified platinum in May. Garupa featuring Pabllo Vittar was certified diamond, while Bomba Relógio featuring Vitão was certified double platinum with over 60 million views on its video. She was featured in the Top 30 platinum hit collaboration Combatchy with Anitta, Lexa, and MC Rebecca. Her second album, Doce 22, was released on July 18, 2021.

How to book Luísa Sonza?

The contact details for Luísa Sonza management can be found here at Booking Agent Info. You can get access to all of Luísa Sonza contacts by signing up and becoming a member. Luísa Sonza's manager is Fatima Pissarra.

You will want to contact Luísa Sonza's publicist. Luísa Sonza's press and management team handles all inquiries involving: interviews, press, and all things media related. You can get the contact info for Luísa Sonza publicist at Booking Agent Info.

What is Luísa Sonza's booking price?

The Luísa Sonza booking fee depends on different factors like the date, location, and market activity. Booking Agent Info provides price estimates for booking Luísa Sonza, and you would need to contact Luísa Sonza's agent to get the official pricing.

..with the contact information for Luísa Sonza agent, manager, and publicist.