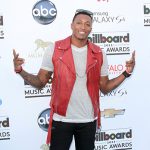 Christian Hip-Hop artist Lecrae was born Lecrae Moore on October 9, 1979, in Houston, Texas.
Although his teenage years were rocky and he battled with drug and alcohol consumption, he finally decided to do right by himself and joined a Bible study group, in which he made close friends and realized that he belonged in their loving community. After walking away from a terrible car accident unscathed, Moore was convinced to devote his life as a Christian. Five years later, he co-founded Reach Records, through which he released Real Talk, his debut album. It went to #29 on the Billboard Gospel Albums, and was nominated in 2007 at the Stellar Awards. He followed the initial success of the first album with his second, entitled After the Music Stops, which went to #5 on the Billboard Gospel Albums.

After releasing his third album Rebel in 2008, Moore released a single entitled “Far Away”, the proceeds of which went to aid the victims of the 2010 earthquake in Haiti. Moore would go on to release Rehab in 2010, Rehab: The Overdose in 2011, Gravity in 2012, and Anomaly in 2014. In 2013, Moore won the Grammy Award for Best Gospel Album for Gravity, after being nominated two years prior for Best Rock Gospel Album for Rehab.

How to book Lecrae?

You can book Lecrae for your event by contacting Lecrae's agent. Lecrae agent will be able to provide you everything you need to hire Lecrae including availability and pricing. You can get the contact info for Lecrae's agent in our database.

The contact details for Lecrae management can be found here at Booking Agent Info. You can get access to all of Lecrae contacts by signing up and becoming a member. Lecrae's manager is Derek Arms. Lecrae's former managers are Jonathan Azu and Andrew Leib. Lecrae management company is based in Houston, Texas.

You will want to contact Lecrae's publicist. Lecrae's press and management team handles all inquiries involving: interviews, press, and all things media related. You can get the contact info for Lecrae publicist at Booking Agent Info. Lecrae's former publicists are Winnie Lam and Kimberly Harris.

What is Lecrae's booking price?

The Lecrae booking fee depends on different factors like the date, location, and market activity. Booking Agent Info provides price estimates for booking Lecrae, and you would need to contact Lecrae's agent to get the official pricing.

..with the contact information for Lecrae agent, manager, and publicist.