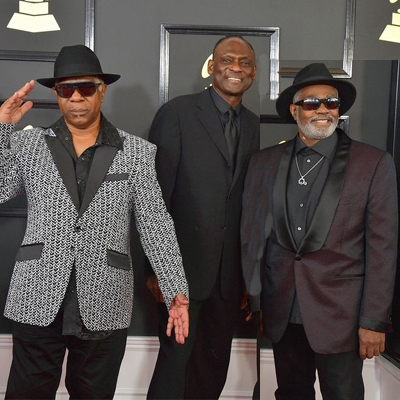 END_OF_DOCUMENT_TOKEN_TO_BE_REPLACED

About Kool & The Gang

Jazz ensamble Kool & The Gang consist of a 13 member group that are well-renowned for their disco & funk sound. The American group is most popularly known for their songs, ‘Get Down On It’, ‘Celebration’, ‘Jungle Boogie’, ‘Open Sesame’, ‘Summer Madness’ and ‘Cherish’. The primary group members are Robert “Kool” Bell (b. October 8, 1950, Youngstown, Ohio, U.S.), Khalis Bayyan (byname of Ronald Bell; b. November 1, 1951, Youngstown, Ohio, U.S.), George (“Funky”) Brown (b. January 5, 1949, Jersey City), Claydes Charles Smith (b. September 6, 1948, Jersey City, New Jersey—d. June 20, 2006, Maplewood, New Jersey) James (“JT”) Taylor (b. August 16, 1953, Laurens, South Carolina), Ricky West (original name Richard Westfield; b. Jersey City—d. 1985) Dennis (“DT”) Thomas (b. February 9, 1951, Jersey City), and Robert (“Spike”) Mickens (b. 1951, Jersey City—d. November 2, 2010, Far Rockaway, New York). Kool & The Gang rose to fame in 1974 with their sixth album, ‘Wild and Peaceful’ released under Delite Records, which became #6 on the R&B charts, #33 on the pop charts turning their album gold. They were later joined by vocalist James “JT” Taylor and Brazillian bossa nova producer Eumir Dedato in 1979 producing their album, ‘Ladies Night’. This contained several big hits such as ‘Ladies Night’ and ‘Too Hot’. This was then followed by their biggest hit, ‘Celebrate’, which is one of the most played songs within the past 25 years. The band has been signed with famous record labels such as Island Def Jam Music Group and UMG Recordings. Kool & The Gang turned 50 and are known as legendary artists, influencing R&B, jazz and soul today. Their songs are the most sampled in music today by artists such as Nas, Kendrick Lamar, Aaliyah and DJ Jazzy Jeff & The Fresh Prince. Presently, the group is still touring as a quintet with remaining primary members, Robert “Kool” Bell, Ronald Bell, Charles Smith, George Brown and Dennis Thomas.

How can I book Kool & The Gang?

The contact details for Kool & The Gang management can be found here at Booking Agent Info. You can get access to all of Kool & The Gang contacts by signing up and becoming a member.

What is the Kool & The Gang booking fee?

You can get the fee to book Kool & The Gang for an event, endorsement, or any type of business engagement through Kool & The Gang's agent. Booking Agent Info provides booking price estimates, but you would contact the agent to get official pricing.

..with the contact information for Kool & The Gang agent, manager, and publicist.