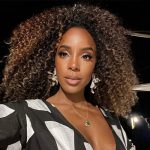 Kelendira Trene Rowland (February 11, 1981), better known as Kelly Rowland, is an American R&B singer, songwriter, actress and dancer. Originally from Atlanta, Georgia, Kelly began her music career as the co-founder and vocalist of 90’s certified platinum female group, Destiny’s Child. During her time with the group, she released her debut solo album in 2002 titled ‘Simply Deep’ with hit single ‘Dilemma’ featuring Nelly. The album sold 2.5 million copies world wide and spent two months at number one on the Billboard charts. In 2004, Destiny’s Child released their fourth and last album, ‘Destiny Fulfilled’ and went on a world tour in the same year while Kelly worked on her second release, ‘Ms. Kelly’ debuted in 2007. Long after her second album, Kelly released her third album under Motown Universal in 2011 titled ‘Here I Am’ with her biggest hit, ‘Motivation’ featuring Lil Wayne, Jim Jonsin and Danny Morris. ‘Motivation’ landed on the Billboard’s Hot R&B/Hip-Hop Charts for many weeks and currently has 115 million plays on Spotify. Her fourth and last album release came in 2013 titled ‘Talk A Good Game’ featuring former Destiny Child members Beyonce and Michelle Williams and Wiz Khalifa. Kelly moved on from her solo recording career by stepping into the acting scene, being featured in big feature films such as Freddie vs. Jason, Think Like A Man and The Seat Filler. The now 39 year-old has also starred as a judge on X Factor in the UK and America along with The Voice in Australia. Throughout her music career, Kelly has won 4 Grammy and has been nominated for 17.

How to book Kelly Rowland?

The contact details for Kelly Rowland management can be found here at Booking Agent Info. You can get access to all of Kelly Rowland contacts by signing up and becoming a member. Kelly Rowland's manager is Tim Weatherspoon. Kelly Rowland's former managers are Lenny Santiago and Daniel Ryan Kinney. Email [email protected] if you have questions about our service.

What is Kelly Rowland's booking price?

The Kelly Rowland booking fee depends on different factors like the date, location, and market activity. Booking Agent Info provides price estimates for booking Kelly Rowland, and you would need to contact Kelly Rowland's agent to get the official pricing.

..with the contact information for Kelly Rowland agent, manager, and publicist.