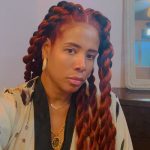 Kelis Rogers (August 21, 1979), popularly known as Kelis, is an American R&B singer, songwriter and chef. She is best known for her hit, ‘Milkshake’. Starting a the young age of 14, Kelis attended Fiorello H. LaGuardia High School of Music & Art and Performing Arts in New York. Kelis learned how to play the saxophone at Fiorello and sung at the Girls Choir in Harlem. Working as a bartender and singing with R&B trio BLU, Kelis was introduced to Pharrell Williams and Chad Hugo from The Neptunes. They created a close friendship and vetted for her talent, landing a record deal with Virgin Records. She released her first album as a teeneger in 1999 titled ‘Kaleidescope’, containing her single, ‘Caught Out There’ which became top 10 on the Hot R&B/Hip-Hop Songs in the US. The album became popular in Europe with her single ‘Caught Out There’ reaching number 4 on the UK single’s chart and was certified Gold by the British Phonographic Industry. In 2001, Kelis won the International Breakthrough Act at the BRIT Awards and NME Award for Best R&B/Soul Act. In the same year, she toured with U2 and Moby and released her second album ‘Wanderland’. In 2003, she released her third album, ‘Tasty’, which became her most popular album. Her single from the album, ‘Milkshake’ became a Hot Dance Play number one, top 3 on the Billboard Hot 100, became certified gold, won a Grammy nomination in 2004 for Best Urban/Alternative Performance and the album went platinum in the UK. Followed by her fourth album, ‘Kelis Was Here’ was released in 2006, also Grammy nominated for Best Contemporary R&B Album. By this time, Kelis has worked with Enrique Iglesias, Ol’ Dirty Bastard and Bjork among many others. She released her fifth album in 2009 titled ‘Flesh Tone’ followed by her 2014 album, ‘Food’. Between the time of her 5th and 6th album, Kelis trained at Le Cordon Bleu culinary school, released a sauce line, a cooking series titled ‘Saucy and Sweet’ and has written her own cookbook. The multi-talented artist has recently done a tour for her 20th anniversary celebrating ‘Kaleidoscope’ in 2019. Her single, ‘Milkshake’, has 140 million plays on Spotify.

How to book Kelis?

You can book Kelis for your event by contacting Kelis's agent. Kelis agent will be able to provide you everything you need to hire Kelis including availability and pricing. You can get the contact info for Kelis's agent in our database.

The contact details for Kelis management can be found here at Booking Agent Info. You can get access to all of Kelis contacts by signing up and becoming a member. Kelis's managers are Steve Satterthwaite and Caitlin Engel. Email [email protected] if you have questions about our service.

You will want to contact Kelis's publicist. Kelis's press and management team handles all inquiries involving: interviews, press, and all things media related. You can get the contact info for Kelis publicist at Booking Agent Info. Kelis's former publicists are Alexis Peluso, Christine Wolff and Kim Juneja.

What is Kelis's booking price?

The Kelis booking fee depends on different factors like the date, location, and market activity. Booking Agent Info provides price estimates for booking Kelis, and you would need to contact Kelis's agent to get the official pricing.

..with the contact information for Kelis agent, manager, and publicist.