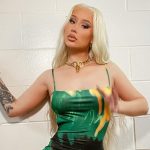 Iggy Azalea born Amethyst Amelia Kelly is a rapper from Australia. She first gained attention with the release of the music videos for her songs “Pussy” and “Two Times” which would gain over a million views on YouTube. Iggy Azalea would release her first mixtape Ignorant Art in 2011, and it would lead to her signing with Island Def Jam. The unique look and swag that she presented in her videos would lead to her being signed as a model to Wilhelmina Models agency, and they would make her the new face of Levi Jeans. As her popularity increased, so did her accolades in the press. Iggy Azalea would be featured on the cover of the XXL on their Freshman 10 issue, and she would go onto align herself with rapper T.I. She has continue to release mixtapes including TrapGold which was entirely produced by Diplo, and she released singles like “Work” and “Change Your Life” that were fairly popular.

How to book Iggy Azalea?

You will want to contact Iggy Azalea's publicist. Iggy Azalea's press and management team handles all inquiries involving: interviews, press, and all things media related. You can get the contact info for Iggy Azalea publicist at Booking Agent Info.

What is Iggy Azalea's booking price?

The Iggy Azalea booking fee depends on different factors like the date, location, and market activity. Booking Agent Info provides price estimates for booking Iggy Azalea, and you would need to contact Iggy Azalea's agent to get the official pricing.

..with the contact information for Iggy Azalea agent, manager, and publicist.