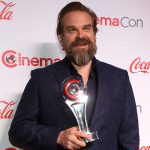 American actor David Harbour was born on April 10, 1975 in New York City, New York. He attended Dartmouth University in New Hampshire and then returned to New York City, which is when he got his first Broadway gig in The Rainmaker along with his first TV guest appearance in Law & Order.

He continued to play short parts in television shows, films, and theater productions for the next few years. In 2005, David was nominated for a Tony Award for “Best Actor in a Featured Role (Play)” for his part in the remake of the original Who’s Afraid of Virginia Woolf?. The same year, he appeared opposite Jake Gyllenhaal and the late Heath Ledger in Brokeback Mountain. In 2016, he starred in Suicide Squad with Will Smith and Margot Robbie.

Also in 2016, David was cast as a police chief in Netflix’s standout series, Stranger Things. He won Screen Actors Guild Award for Outstanding Performance by an Ensemble in a Drama Series for this role. This role also got him nominations for a Fangoria Chainsaw Award and a Primetime Emmy Award in 2017. Regarding his success, some people give credit to his acting teacher, Tony Greco, who was also Philip Seymour Hoffman’s teacher.

How to book David Harbour?

The contact details for David Harbour management can be found here at Booking Agent Info. You can get access to all of David Harbour contacts by signing up and becoming a member.

What is David Harbour's booking price?

The David Harbour booking fee depends on different factors like the date, location, and market activity. Booking Agent Info provides price estimates for booking David Harbour, and you would need to contact David Harbour's agent to get the official pricing.

..with the contact information for David Harbour agent, manager, and publicist.