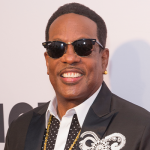 Charlie Wilson (born January 29, 1953) is an American singer, songwriter, producer and actor from Tusla, Oklahoma widely known as the lead singer for 70’s funk group, The Gap Band. The Gap Band consisted of Charlie and his brothers Robert and Ronnie Wilson, popularizing upbeat funk with their hit songs, ‘Burn Rubber on Me’, ‘Yearning For You Love’, ‘You Dropped A Bomb on Me’ and ‘Outstanding’. While performing with the Gap Band, Charlie was recording as a solo artist with P Music Group releasing his first debut album, ‘Bridging the Gap’ in 2000. Lead single ‘Without You’ from his debut album landed at number 1 on the Billboard Urban Adult Contemporary chart. This led to Wilson signing with Jive Records for a multi-record deal, releasing his second album, ‘Charlie, Last Name Wilson’ in 2005 which was produced alongside many popular artists such as Justin Timberlake, R. Kelly and will.i.am, leading to it’s gold certification by RIAA. Charlie did not produce a third album until 2009, where ‘Uncle Charlie’ was released, which received 2 Grammy Nominations for Best R&B Album and Best Male R&B Vocal Performance for his hit, ‘There Goes My Baby’. The Gap Band disbanded in 2010 but Charlie went on to pursue his solo career. As a solo artist, Charlie’s talent became even more prominent by collaborating with Snoop Dogg, 2 Pac, Kanye West and Bruno Mars amongst many others. The now 67 year old Charlie has been nominated for 13 Grammy’s, 8 nominations and 2 wins for the NAACP Image Awards and his been honoured by Billboard, Soul Train and Media Base over the course of his career.

How to book Charlie Wilson?

The contact details for Charlie Wilson management can be found here at Booking Agent Info. You can get access to all of Charlie Wilson contacts by signing up and becoming a member. Charlie Wilson's manager is Michael Paran. Email [email protected] if you have questions about our service.

What is Charlie Wilson's booking price?

The Charlie Wilson booking fee depends on different factors like the date, location, and market activity. Booking Agent Info provides price estimates for booking Charlie Wilson, and you would need to contact Charlie Wilson's agent to get the official pricing.

..with the contact information for Charlie Wilson agent, manager, and publicist.