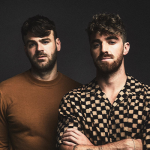 Electro house duo The Chainsmokers was formed in 2012 in New York by Andrew Taggart and Alex Pall. They rose to fame as a songwriting, DJ/production duo who remixed popular songs from well-known indie bands. In 2012, they released the song “Erase” with actress and artist Priyanka Chopra, which they followed with the track “The Rookie” the next year. It was not until 2014, however, that The Chainsmokers experienced a breakthrough when they released the single “#selfie” for free in late 2013. Due to the attention they gained from the single, they were signed to Dim Mak records, who re-released the track in early 2014. They later signed a contract with Republic Records. The single “#selfie” went on to chart at #2 in Sweden, #3 in Australia, and at #16 in the United States.

How to book The Chainsmokers?

What is The Chainsmokers's booking price?

The The Chainsmokers booking fee depends on different factors like the date, location, and market activity. Booking Agent Info provides price estimates for booking The Chainsmokers, and you would need to contact The Chainsmokers's agent to get the official pricing.

..with the contact information for The Chainsmokers agent, manager, and publicist.