She became famous in 2021 when her debut single Cliché received millions of views on streaming platforms. Her discography now includes the singles Perfect Strangers, Monday Morning, Listerine, Terrify You With My Heart, and the studio project Tender.

How to book Cece Coakley ?

The contact details for Cece Coakley  management can be found here at Booking Agent Info. You can get access to all of Cece Coakley  contacts by signing up and becoming a member.

The Cece Coakley  booking fee depends on different factors like the date, location, and market activity. Booking Agent Info provides price estimates for booking Cece Coakley , and you would need to contact Cece Coakley 's agent to get the official pricing.

..with the contact information for Cece Coakley  agent, manager, and publicist. 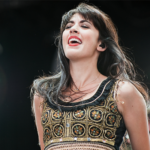