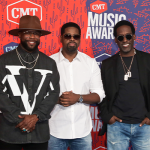 Boyz II Men is an iconic American R&B & hip-hop vocal group hailing from Philadelphia, Pennsylvania. According to the Recording Industry Association of America (RIAA), Boyz II Men is “the most comercially successful R&B group of all time”. The group originally started with 5 members; Wanya Morris (born July 29, 1973), Nathan Morris (born June 18, 1971), Marc Nelson, Michael McCary and Shawn Stockman (born September 26, 1972) under the name Unique Attraction and formed at Philadelphia’s High School of the Creative and Performing Arts in 1988. The group’s career started in an unconventional way, as they snuck into a Bell Biv DeVoe show and stunned Michael Bivins, founder of music group New Edition. The group was instantly signed to Motown Records, releasing their first debut album as Boyz II Men in 1991, Cooleyhighharmony, produced by Michael Bivins. The album won a Grammy in the same year for Best Vocal Performance by a Duo or Group and went on to tour with MC Hammer in 1992. The group was left with Wanya Morris, Nathan Morris and Shawn Stockman before the release of their second album. A year later, Boyz II Men produced their single, ‘End of the Road’ for Eddie Murphy’s film, Boomerang. The single beat out Elvis Presley ‘Don’t Be Cruel/Hound Dog’, cementing the group’s status in the music industry with their “doo wop hip hop” sound. The group’s music career has truly pivoted the sound of R&B music and have won several awards during their 25 year run, winning 4 Grammy’s, 9 Soul Train Awards, 9 American Music Awards, 3 Billboard Awards and a MOBO Award for Outstanding Contribution to Music. Throughout their career, the group has released 13 full studio albums alongside numerous features and singles, producing 18 Hot 100 Songs. . ‘End of the Road’ currently has 132.6 million plays on Spotify, along with their top hits, ‘I’ll Make Love To You’ with 121.7 million plays, ‘One Sweet Day’ with 75.3 million plays and ‘On Bended Knee’ with 44 million plays. Presently, Boyz II Men frequently goes on tour globally and is active in their charity work for Make-A-Wish Foundation, Shriner’s Hospital or Children and Save The Music Foundation amongst many other non-for-profit work.

How to book Boyz II Men?

The contact details for Boyz II Men management can be found here at Booking Agent Info. You can get access to all of Boyz II Men contacts by signing up and becoming a member. Boyz II Men's manager is Joe Mulvihill. Email [email protected] if you have questions about our service.

The Boyz II Men booking fee depends on different factors like the date, location, and market activity. Booking Agent Info provides price estimates for booking Boyz II Men, and you would need to contact Boyz II Men's agent to get the official pricing.

..with the contact information for Boyz II Men agent, manager, and publicist.