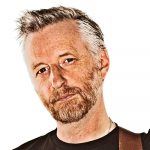 Stephen William Bragg is an English singer-songwriter who was born on December 20, 1957. His music combines folk music and punk rock elements with lyrics that cover a wide range of political and romantic topics. His music is heavily centered on involving the younger people in political activism.

Bragg grew up with his father, Dennis Frederick Austin Bragg, an assistant sales manager for a Barking cap maker and milliner. His wife, Marie Victoria D'Urso, was of Italian origin.

He attended Barking's Northbury Junior School and Park Modern Secondary School, where he failed his eleven-plus exam, effectively disqualifying him from attending university.

Bragg then focused his efforts on learning and practicing the guitar with his next-door neighbor, Philip Wigg (Wiggy); the Faces, Small Faces, and Rolling Stones were among their influences.

In 1977, he founded his punk-rock group, and in 1986, he released Talking with the Taxman About Poetry, which became his first Top 10 album.

How to book Billy Bragg?

The contact details for Billy Bragg management can be found here at Booking Agent Info. You can get access to all of Billy Bragg contacts by signing up and becoming a member. Billy Bragg's manager is Juliet Wills.

You will want to contact Billy Bragg's publicist. Billy Bragg's press and management team handles all inquiries involving: interviews, press, and all things media related. You can get the contact info for Billy Bragg publicist at Booking Agent Info.

What is Billy Bragg's booking price?

The Billy Bragg booking fee depends on different factors like the date, location, and market activity. Booking Agent Info provides price estimates for booking Billy Bragg, and you would need to contact Billy Bragg's agent to get the official pricing.

..with the contact information for Billy Bragg agent, manager, and publicist.