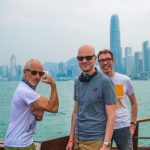 Hailing from London, England, is the DJ and producer trio Above & Beyond, composed of Jono Grant, Paavo Siljamäki, and Tony McGuinness. Siljamäki and Grant met while they were students at the University of Westminster, and bonded over their love of music. Their new friendship forged by an old passion drove them to begin the record label Anjunabeats in 1999, through which they released “Volume One”, their first song. The duo went through a handful of name changes, yet after they met McGuinness, they decided on Above & Beyond, and from there they went on to remix the popular song “Home” by Chakra.

In 2002, the trio made their debut appearance in Tokyo, DJ-ing along with Tiesto, and in 2006, the released their debut album Tri-State, which received a five-star review from DJ Magazine. They went on to release Group Therapy in 2010, featuring the hit single “Thing Called Love” and shooting to #1 on the iTunes Dance Album chart. Their third album Acoustic was released in early 2014. Since their appearance on the DJ scene, Above & Beyond have also produced a wide array of radio shows.

How to book Above & Beyond?

The contact details for Above & Beyond management can be found here at Booking Agent Info. You can get access to all of Above & Beyond contacts by signing up and becoming a member. Above & Beyond's manager is James Grant.

What is Above & Beyond's booking price?

The Above & Beyond booking fee depends on different factors like the date, location, and market activity. Booking Agent Info provides price estimates for booking Above & Beyond, and you would need to contact Above & Beyond's agent to get the official pricing.

..with the contact information for Above & Beyond agent, manager, and publicist.